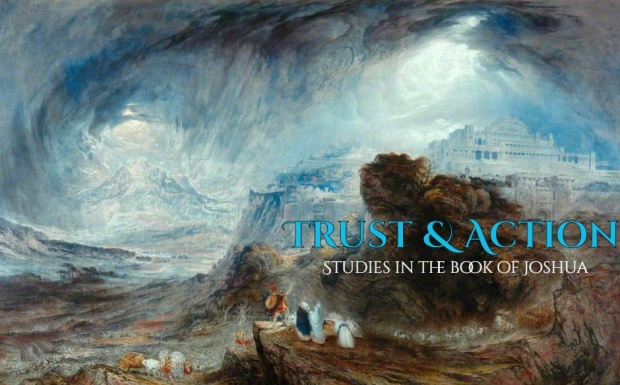 Introduction
Last week we thought through what having a promise-making, promise-keeping God meant about that God.  This week, we look at what that means for those of us who call themselves his children.  The divvying out of the land in Joshua 13-22 is interrupted by two brief stories; one of the noble Caleb, the other of the fainthearted people of Joseph.  These two examples, one good, one bad, help us to see how God wants us to respond to his promises.  From Caleb, we learn that a true child of God

1. Learns from past experiences
Caleb briefly recalls the failure of the spies from Numbers 13-14, explaining that his answer, that the people should go up and take the land, was “as it was in my heart.”  Caleb had seen what God could do, had experienced his power on the shores of the Red Sea and in the sands of Egypt.  The people of Joseph, on the other hand, seemingly forgot what God had done just earlier that week.  Do we learn from our own experiences? When faced with difficulty, do we only stare forward at our adversity, or look backward and learn from God’s kept promises?

3. Encourages others to fulfill God’s will
But we never just act for our own sake’s.  We are not only responsible for what we do, but also for what we encourage others to do.  Caleb is twice recorded in Scripture as pushing people on in God’s calling for them.  His is a lasting legacy of faithfulness, passed down through the ages, that we would do well to imitate.  The people of Joseph have a legacy as well, one that spurs the people of Israel to faithlessness before God, rampant idolatry, and even a civil war.

Conclusion:
While Caleb stands as a capable example for us, there is no example as full or as sweet as that of Jesus Christ.  Jesus knew God from before the world began, and so was able to remember his goodness when the world closed down on him.  When his creation and friends left him for dead, he was willing to stand alone for what was right.  And he is indeed our greatest encouragement, not just providing us an example of holiness, but of power in the Holy Spirit.